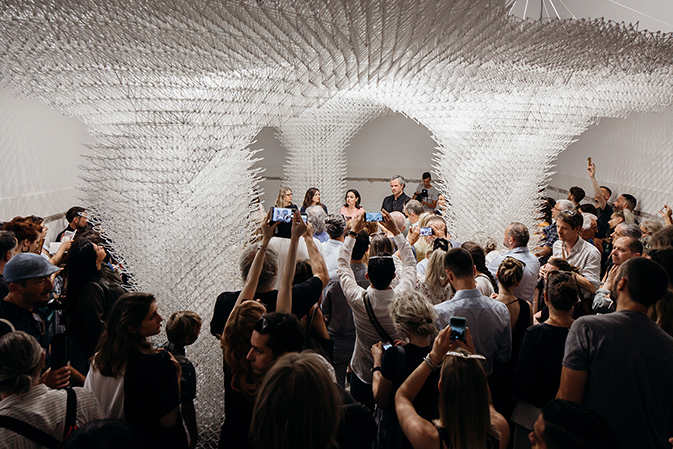 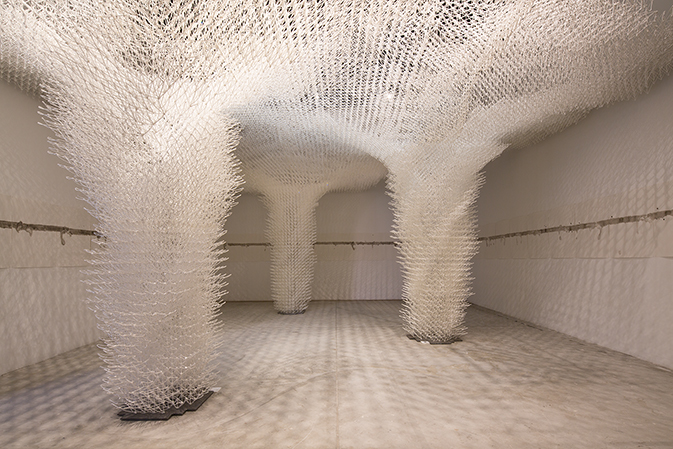 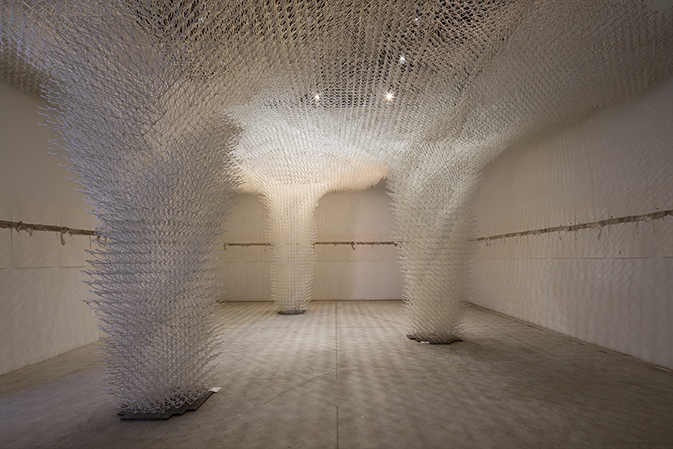 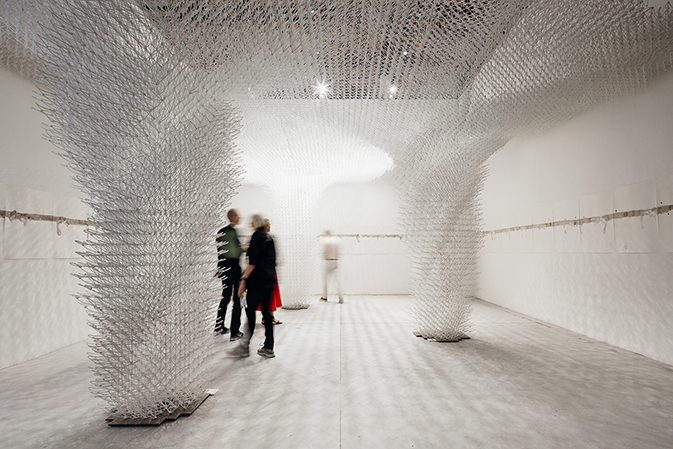 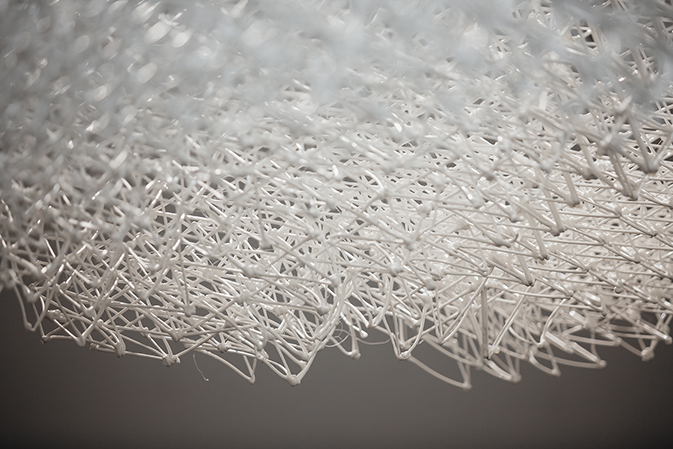 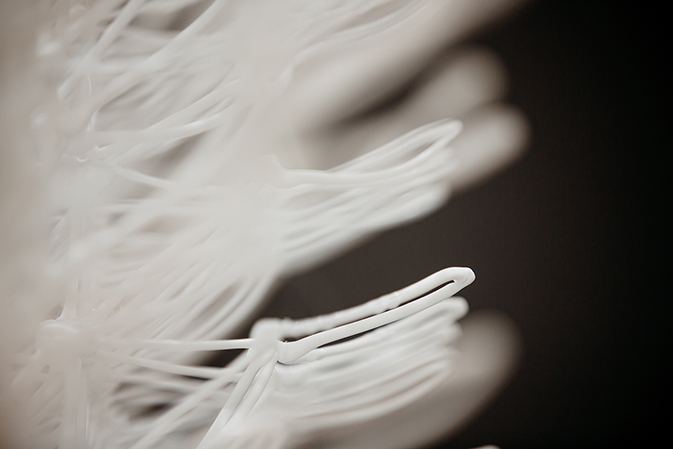 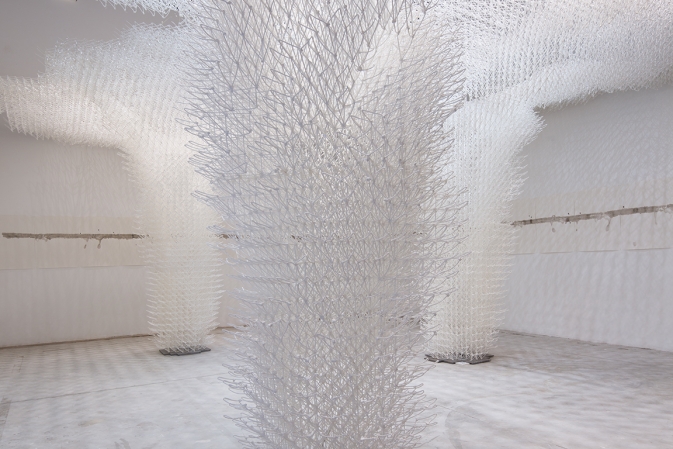 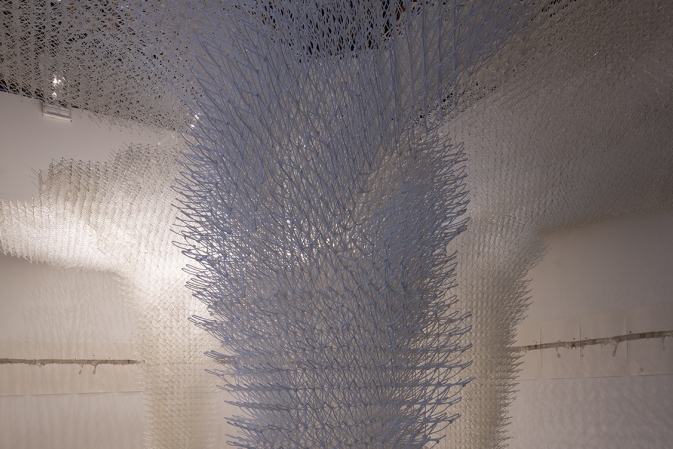 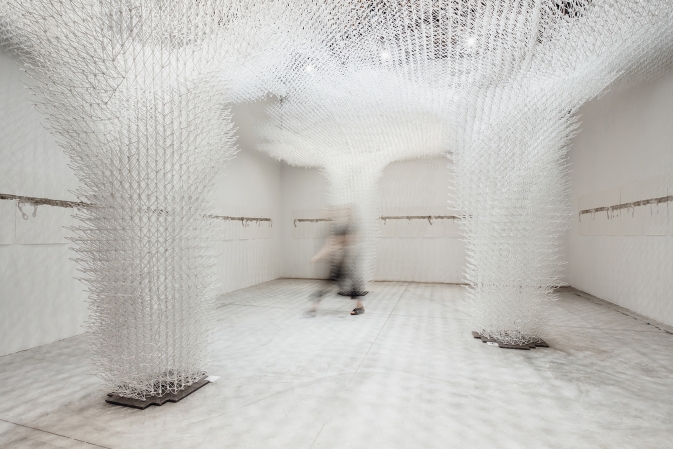 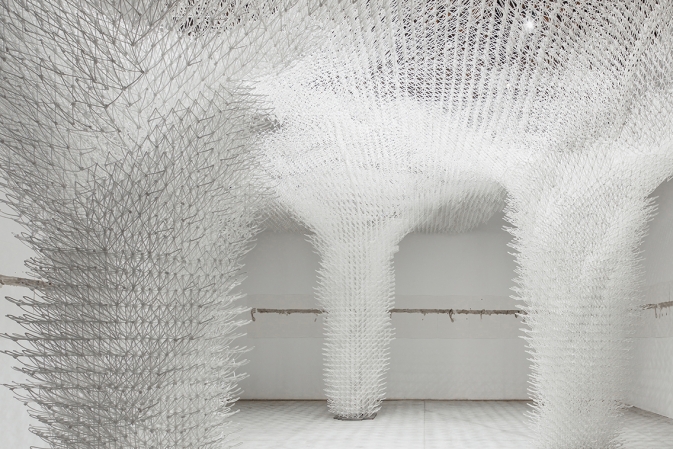 Cloud Pergola / The Architecture of Hospitality at the Croatian Pavilion is a collaborative site-specific environment conceived by the pavilion curator, Bruno Juričić. Cloud Pergola is an installation crossing the boundaries of architecture, art, engineering, robotic fabrica­tion, and computational models. The exhibition is structured through an interplay of three interventions: Cloud Drawing by Alisa Andrašek and Bruno Juričić, To Still the Eye by Vlatka Horvat, and Ephemeral Garden by Maja Kuzmanović.

In the cultural context of the Mediterranean, the typology of the pergola, as a minor architectural element, maps a specific experience. A simple, elementary, vernacular structure which performs a vivid spatial gesture, it inhabits the space in-between private and public, acting as a conduit between the man-made and the natural environment, as well as providing shade and shelter from the sun. The installation promotes a notion of hospital­ity as experienced under the pergola, using the position that the role of boundaries, either physical or non-physical, is no longer to enclose space, or police its limits, but rather to form tissue for osmotic exchange. Furthermore, it recognizes the active participation of non-hu­man forces in “events,” and an understanding that the agency of space exceeds human intentions.

A wall-based work titled To Still the Eye by visual artist Vlatka Horvat comprises a series of drawings made by bare feet immersed in an acrylic wash. Manifested as a trace of the body’s journey across paper, the work explores the notion of the horizon as a physical manifestation of distance, an endpoint destination for the eye, and a metaphor for the future and for a sense of possi­bility.

Transdisciplinary artist Maja Kuzmanović proposes a sound installation titled Ephemeral Garden that evokes a sense of convivial gatherings under a pergola. The murmur of conversation, complemented with the sound of animated matter, conjures a space where human and non-human voices intermingle.

The interplay of the three interventions creates new complex ecologies by inviting previously unrelated subjects and objects, people and things, to come into contact with each other in a way that exceeds language, self-iden­tity, rigid conceptual determination, ideology, or political declaration. Ultimately, Cloud Pergola creates space whereby new sensations, new thoughts, and new social realities may develop, whilst proposing an expanded notion and experience of “hospitality”, something that Predrag Matvejević calls “The Mediterranean Alternative”.